The bunch of us are back to take on the new semester after very eventful breaks. Personally, I explored a lot of vegan restaurants, cooked & hiked a lot and did my share of political action against our new white house administration, which you may know is not the most environmentally geared administration.(Women’s March on NYC  & Paterson Great Falls National Park 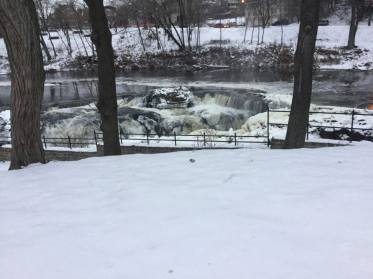 Three housemates were able to study abroad as well, which I’m sure they would love to elaborate on individually.

When most of us arrived back on Sunday the 22nd, our heat was broken which left us shivering for two nights straight, but I mean at least we saved gas, right???? No, it was bad. But eventually it WAS fixed and we are back to freezing a bit less. Even with the heat functioning, there’s still some work to be done in the house, which is incredibly drafty. Up in mine and Ellen’s room, the windows let in a lot of cold air. I attempted to close up the AC by taping a folded blanket around it, and after checking in on it about a second ago I’ve noticed that the blanket has already fallen off. So, I’m gonna have to try again at that or think of something else. Ideally, I’d like to take the AC out for the winter, that way there’s much less room for drafts. Even with that, we need to work on insulation.

We’ve had our first meeting as a house already, where we have set big goals and I have already noticed our renewed determination. In our efforts to reduce waste and increase compost, we have been paying more attention to the packaging we buy when out grocery shopping. While out yesterday with Renee, she helped keep me on track and we made sure to minimize the non-recyclable or compostable waste we were bringing into the house. Another idea for a similar purpose was to have communal paper waste box downstairs that Gina could take to get shredded at her job, to then be used at compost. This became an idea because of all of the leftover papers we have from last semester and our desire not to add them to our amounts of waste.

Other than that, there’s not much to discuss yet since it is so early on. I’m taking two scheduled classes, three including the course credit from living in the House, so I’ve got plenty of more time this semester than I did last. It will be interesting to see how much more time I will be able to devote to the house all things considered. I’m excited for the events we will be hosting this semester as well, as I’ll be ideally hosting a vegan baking session with facts on environmental benefits of eating less animal based and how to accomplish that as a college student with limited food options. Now that we have formed bonds and mutual respect in the house, I think we will have an even more successful semester this time around.

This week was spring break so the sustainability house was empty and quiet. While home for break I realized how much work we put into the house. I remember looking for the tally sheet for when I showered or flushed the toilet. Also I was looking for the energy meter to constantly see how much energy  was being used. Without being in the house I found myself always double checking to make sure everything I was doing was the same at school- I won’t lie my showers were a little longer at home but everything else I was pretty much the same. While being home I realized that laziness is a large problem when it comes to being more conscious of what we do in the house – I could not tell you how many times I had to follow behind my younger sister and turn off the lights in the room – she was constantly leaving lights on and I realized that being home I’m in an environment where not everyone is as conscious as I am and it made it easy to see the outsider’s perspective of just living life.  The house has already had a huge impact on how I can change my day-to-day life and maybe I can teach my sister how easy it could be to turn the light switch down as she leaves a room.